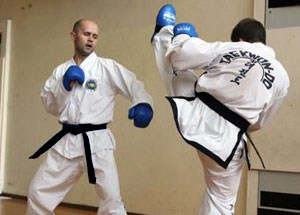 Thus, taekwondo may be loosely translated as "the way of the hand and the foot."

The name taekwondo is also written as taekwon-do, tae kwon-do, or tae kwon do by various organizations. It is also commonly abbreviated as TKD.

Taekwon-do is not to be confused with many other styles of martial arts. Emphasis is placed on self defence, and the necessary personal development of self-control.

Concurrent with the development of ones physical ability (co-ordination, strength, reflex, endurance, speed etc), psychological development, leading to a greater self belief is assisted by the memorising and practising of the 6 Tenets (doctrine of belief) of Taekwon-do. The precise interpretation of them in every day life is what makes one a true practitioner of the Art.

Taekwon-do is a modernised and scientifically developed version of a centuries old Korean Martial Art. Based on Karate, it is a relatively modern martial art, created by a Korean Army General called Choi Hong Hi in the mid-20th century.

Hundreds of years ago in Korea, the warrior class of society known as the Hwarang-Do practised a form of weaponless combat known as Taek Kyon and developed a code of conduct to serve as a guideline to compliment their intensive physical training.

Taekwon-do was 'born' on April 11th, 1955 having been created by General Grandmaster Choi Hong Hi - 9th Degree Black Belt. Gen Choi was born on November 9th, 1918 in the rugged and harsh area of Hwa Dae, Myong Chun District in what is now D.P.R of Korea.

Even at an early age the future general showed a strong and independent spirit and Choi's father sent him to study calligraphy under one of the most famous teachers in Korea, Mr. Han II Dong. Han, in addition to his skills as a calligrapher, was also a master of Taek Kyon, the ancient Korean art of foot fighting.

Whilst studying in Japan (during the Japanese occupation of Korea) Choi met a fellow Korean, Mr. Him, who was engaged in teaching the Japanese martial art, Karate. Within a few years of concentrated training, Choi attained the rank of second degree black belt. These techniques, together with Taek Kyon (foot techniques), were the forerunners of modern Taekwon-do.

It was not until the 1940's when the General decided that Korea needed it's own martial art for it's own army that the foundations of Taekwon-do were laid.

On the 11th of April 1955 a board, consisting of ministers and army officers was convened by Gen. Choi in order to officially name this art that he had researched into and invented. Taekwon-do was the name submitted by the General and accepted thereby becoming the name of the most powerful Martial Art the world has come to know.

Although General Choi's fundamental training was in Taek Kyon and Karate the basic principles of Taekwon-do are totally different from those of any other martial art in the world. When you look at some martial arts and you are impressed by their dance like grace and beauty, with Taekwon-do you can marvel at its spectacular power and practical effectiveness.

This is what makes it so special. General Choi compiled a total of 24 Patterns frequently referred to as the Chon-ji or Chang Hon (his pen name) series and this is the compilation that forms the backbone of the BUTF's syllabus.